Back in the fall when I was a baby blogger I wrote a discussion of Carol Dweck’s research about intelligence praise. I did this because I think this research is intensely important. However, I didn’t really let loose on the subject with the full force of what I have to say about it. The truth is I was shy, because a) I’d just had a kind of frustrating conversation on the subject with Unapologetic at Jesse Johnson’s blog, so I was wary of being misunderstood, and b) more embarrassingly, I was excited by the positive response to my previous post about Clever Hans and I didn’t want to alienate any of my new audience.

Now I am a toddler blogger. My godson, with whom I spent the day a few weeks ago, is an actual toddler. 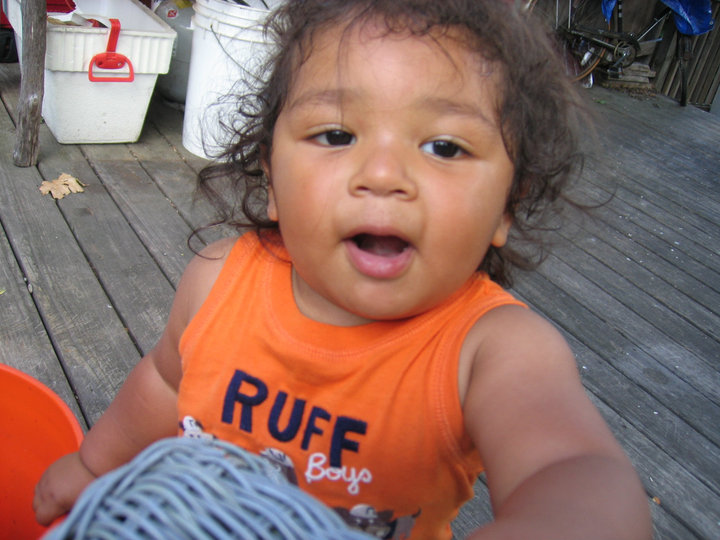 He is profoundly unconcerned with anybody’s opinion of him, and just blazes forth expressing himself (climbing on things; coveting whatever his big sister is playing with; being turned upside down as much as possible) all day long. I am going to take this as inspiration, and commence a series of posts about the idea of “math smarts” and talent and intelligence more broadly. These posts have two central contentions:

1) People constantly interpret mathematical accomplishment through the lens of math talent or giftedness.

2) This is both factually misleading and horrible for everyone.

Tentatively, here is the table of contents for this series. I may edit these titles, add or remove some, and I’ll add links when I’ve got the posts up. But here’s the plan for now:

I should make more precise what I mean by “the talent lie.” It’s really several variants on a fundamental idea. People who are really good at math must have been born with a gift, for example. That they must be extra smart. That being good at math (or not) is something that doesn’t change over time. That being smart (or not) doesn’t change. In short, that your intellectual worth, and the worth of your engagement with the field of mathematics in particular, is an already-determined quantity that’s not up to you. That’s the talent lie.

Some examples of the talent lie at work:
* Any time anyone has ever said, “I’m bad at math.”
* The “gifted” in gifted education.
* Just about any time anybody makes a big deal about the age by which a young person does something intellectual. (Starts talking, starts reading, starts learning calculus…)

(In that last bullet, the “just about” is there only because of the theoretical possibility that a big deal might get made for a reason other than to prognosticate about the person’s ultimate intellectual worth.)

I give you these examples to show that I am not talking about a fringe, outmoded idea but something very mainstream. I will have much more to say about how the talent lie is manifested in the forthcoming posts.

I expect to spend a long time writing them. This project may take all the next decade. I believe the message I’m communicating is vital for our field and important more broadly as well. It’s also a very personal message. Like all urban educators and all math teachers, I have a lot of first-hand experience with the damage that the labels “not smart” and “not good at math” can inflict. But I am also speaking as someone who spent my early years being seen by others, and regarding myself, as mathematically gifted. This was a heady and thrilling thing when I was in middle school, but I became vaguely aware of the complications by the end of high school, and with hindsight it’s clear that it left me with baggage that took a decade of teaching, learning and introspection to shake. So my own journey is a big part of the story I’m telling here.

I will save the detailed analysis for the forthcoming posts, which means that I am going to defer a lot of clarification and answering-questions-you-might-have for later. But I would like now to articulate in broad terms what I believe needs to change.

According to the Calvinist doctrine of unconditional election, God already decided whether you are going to be damned or saved, and did this way before you were born. Nothing you can do – not a life of good acts, not a wholehearted and humble commitment to acceptance or faith – can have any effect. The most you can do is scan your life for signs of God’s favor, and read the clues like tea-leaves to see if you are chosen or cast away. Modern American culture doesn’t buy this doctrine from a theological point of view, but is 100% bought in when it comes to math. When a person performs mathematically, we obsessively look at the performance, not on its own terms, but as a sign one way or the other on the person’s underlying mathematical worth, a quantity we imagine was fixed long ago.

We need, as a culture, to gut-renovate our understanding of what’s going on when we see people accomplish impressive mathematical feats. Likewise, when people fail at mathematical tasks. We need to stop seeing people’s mathematical performance as nothing more than the surface manifestation of a well-spring of mathematical gifts or talent they may or may not have. Relatedly but even more importantly, we need to stop reading the tea-leaves of this performance to determine these gifts’ presence or absence. This whole game is bunk.

Not only is it bunk but it’s a crippling distraction, for everyone – teachers, students, parents, and our culture as a whole – from the real job of studying, wandering through, becoming intimate with and standing in awe of the magnificent edifice known as the discipline of mathematics.

When you step to the gate and present yourself before it, math doesn’t give a sh*t about the particular profile of cognitive tasks that are easy and hard for you at this moment in time, and you shouldn’t either. There are institutions that are very keen to divine from this profile your worthiness to enter, but this is the curtain they hide behind to make themselves look bigger than they are. It’s time to tear that curtain down.

More on its way. In the meantime here is some related reading:

* I Speak Math recently tackled this same subject. I plan on drawing on some of the research she links.

* Jesse Johnson and I had a conversation about this stuff close to a year ago, and she wrote about it here and here. I’ll go into much more detail on these themes in the coming posts.

* While not as credentialed, the Wizard of Oz nonetheless has a fair amount in common with wolverine wranglers. See if you see what I mean.

I love mathematics, teaching it and learning it. I believe learning math can give us faith in our own minds and imaginations like nothing else can.

This blog is about teaching and math.